This recipe is for my friend Bob. He asked me the other weekend for a good summer crockpot recipe. My go-to recipe is pulled pork because it is so easy and works anytime of the year. However, I had recently made this minestrone chalked full of summer produce that practically screams summertime. 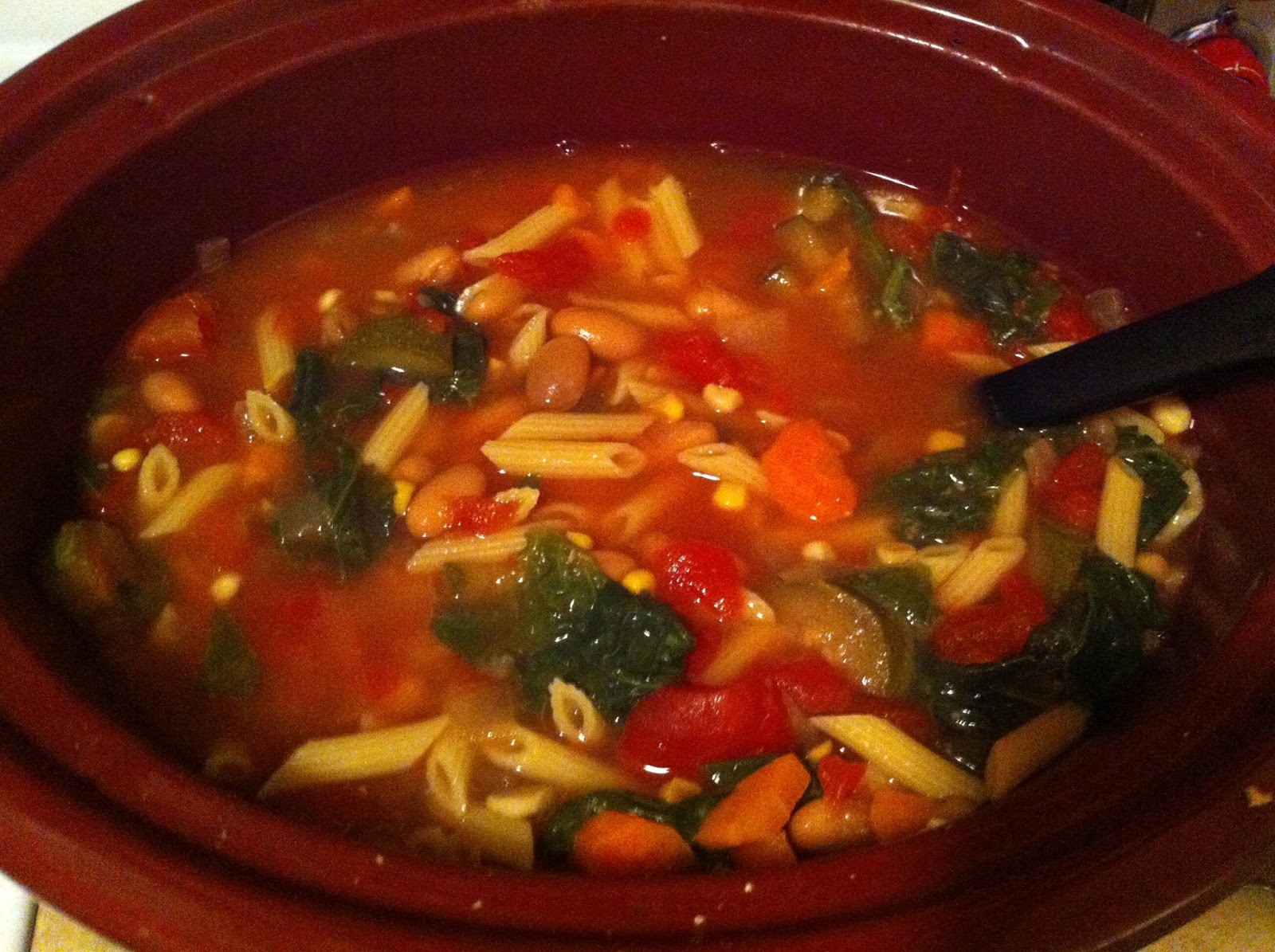 Maybe not the best for the crazy 100 degree weather we've been having this week, but as long as you've got air conditioning, it'll be a great choice. Feel free to substitute any fresh vegetables that you desire... I was actually inspired by a springtime minestrone soup (follow the link below if you want it) but subbed in perfect summer vegetables like zucchini and corn. 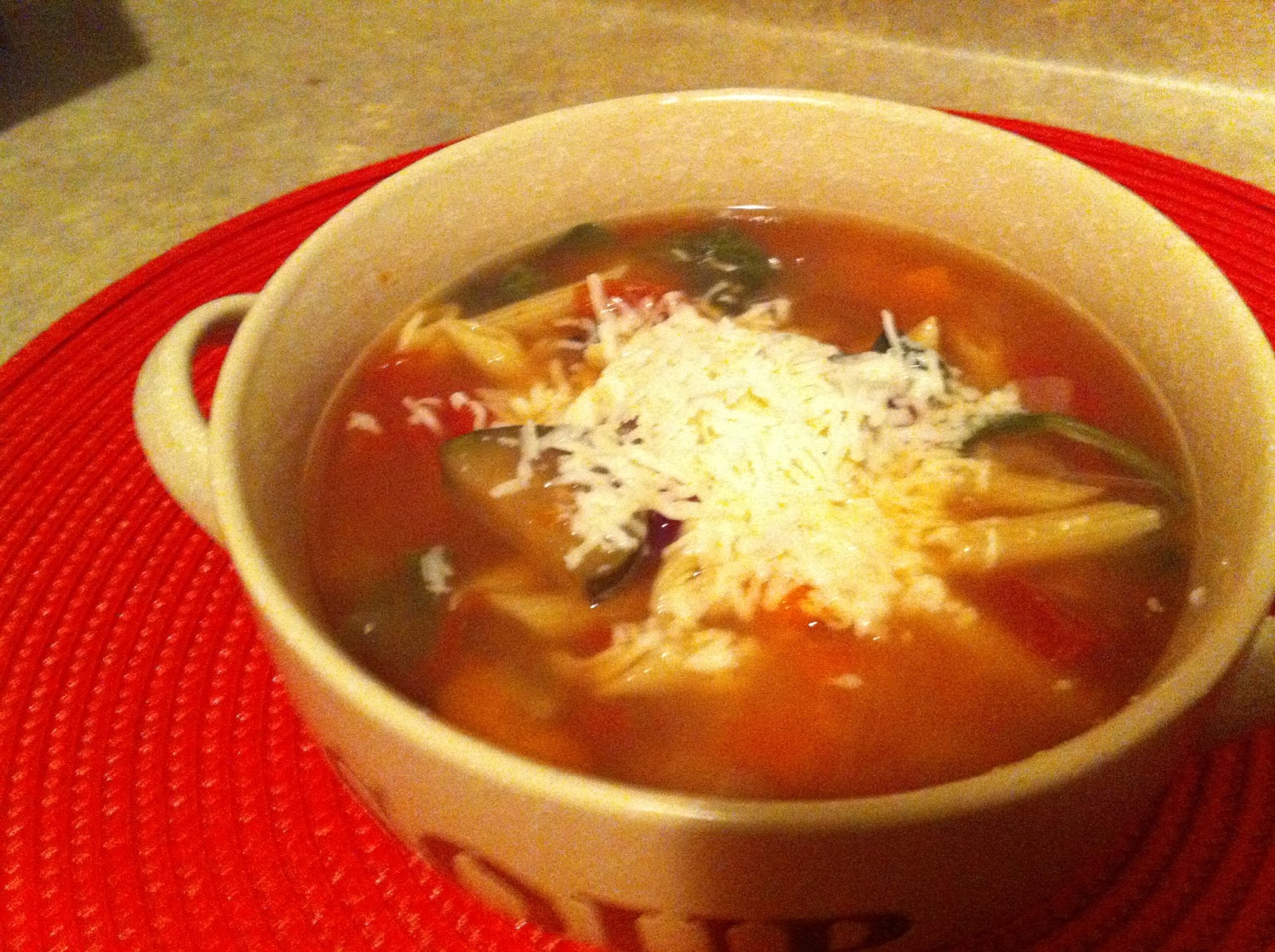 Directions:
In the crock of your slow cooker, combine the onion, carrot, garlic, zucchini, corn, tomatoes, beans, vegetable broth and water. Cook on low for 6-8 hours.

Stir in the pasta and spinach and cook for another 10-15 minutes until the pasta is cooked. Season with salt and pepper to your liking

There is something you should know about me. I really like clean teeth. I definitely brush at least twice a day (more if I'm at home after lunch) and I floss and I use fluoride mouth rise. I like the feeling after swishing around the mouthwash because it burns and I know it is clean. I just can't imagine going to bed without brushing my teeth. Gross.

However, I do not love the dentist. I never have. I used to get sick at the dentist when they would shove those plastic mold things of fluoride in my mouth. And I had a lot of visits to the dentist and orthodontist growing up. Now I have straight, pretty, healthy teeth so I guess it is something that I have to endure. But for some reason  that gritty toothpaste they use makes my mouth feel unclean. Plus who in the world would want strawberry or bubblegum toothpaste? Mint is what makes your mouth taste clean, right?

Well today I went to the dentist and left feeling even grosser than ever! The hygienist put this fluoride paste on my teeth after she was done with the cleaning. It literally felt like I had gum stuck everywhere on my teeth. And she told me not to brush it off until after 4 hours. Since I'm a rule-follower, I suffered through the day with gunk on my teeth worrying that someone could tell and would think I had not brushed for days. Eww. Eww. Eww. 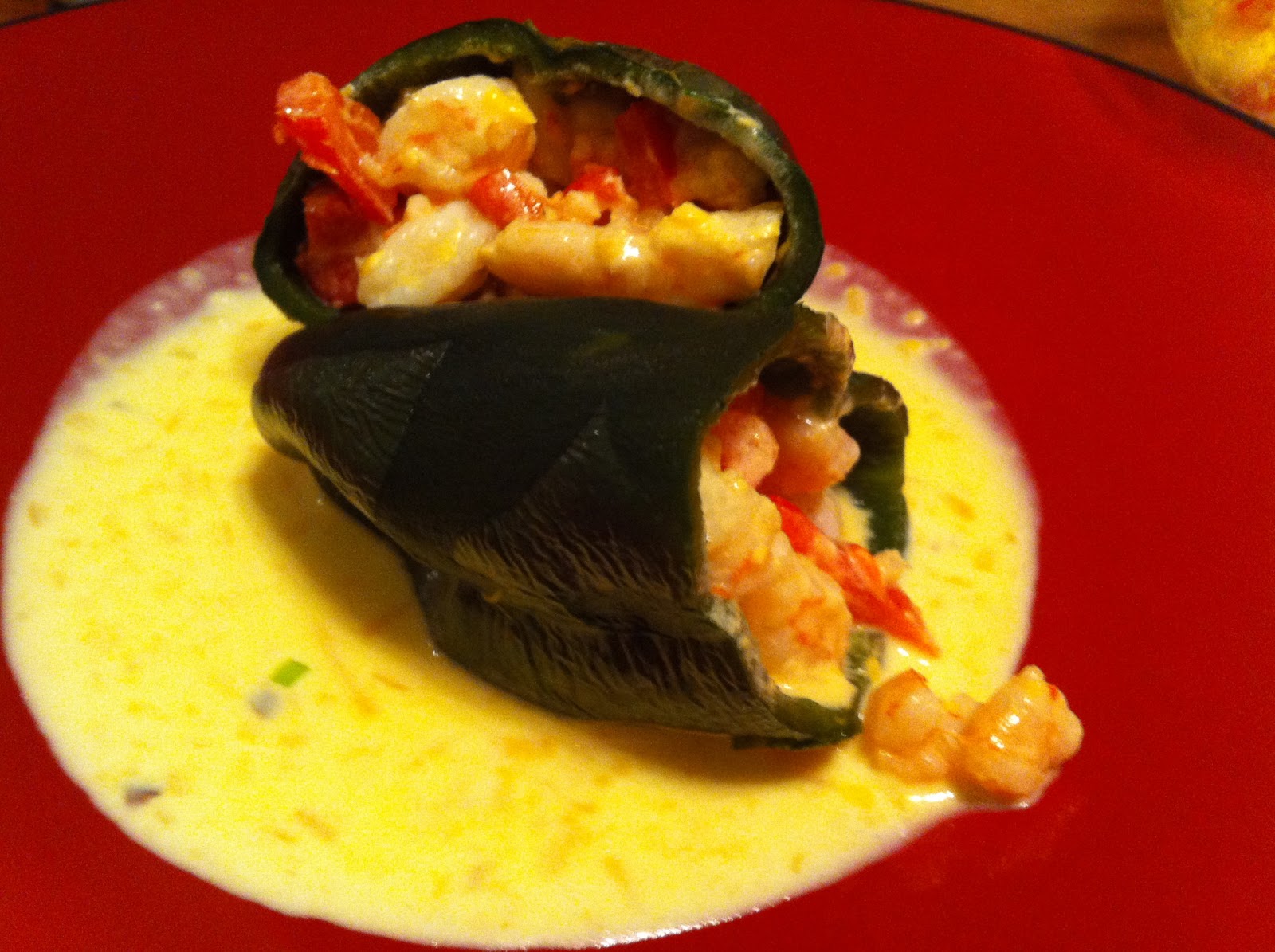 Anyway, on a happier note, make these shrimp stuffed poblano peppers. They are delicious and will definitely perk up any bad start to a day. Promise. 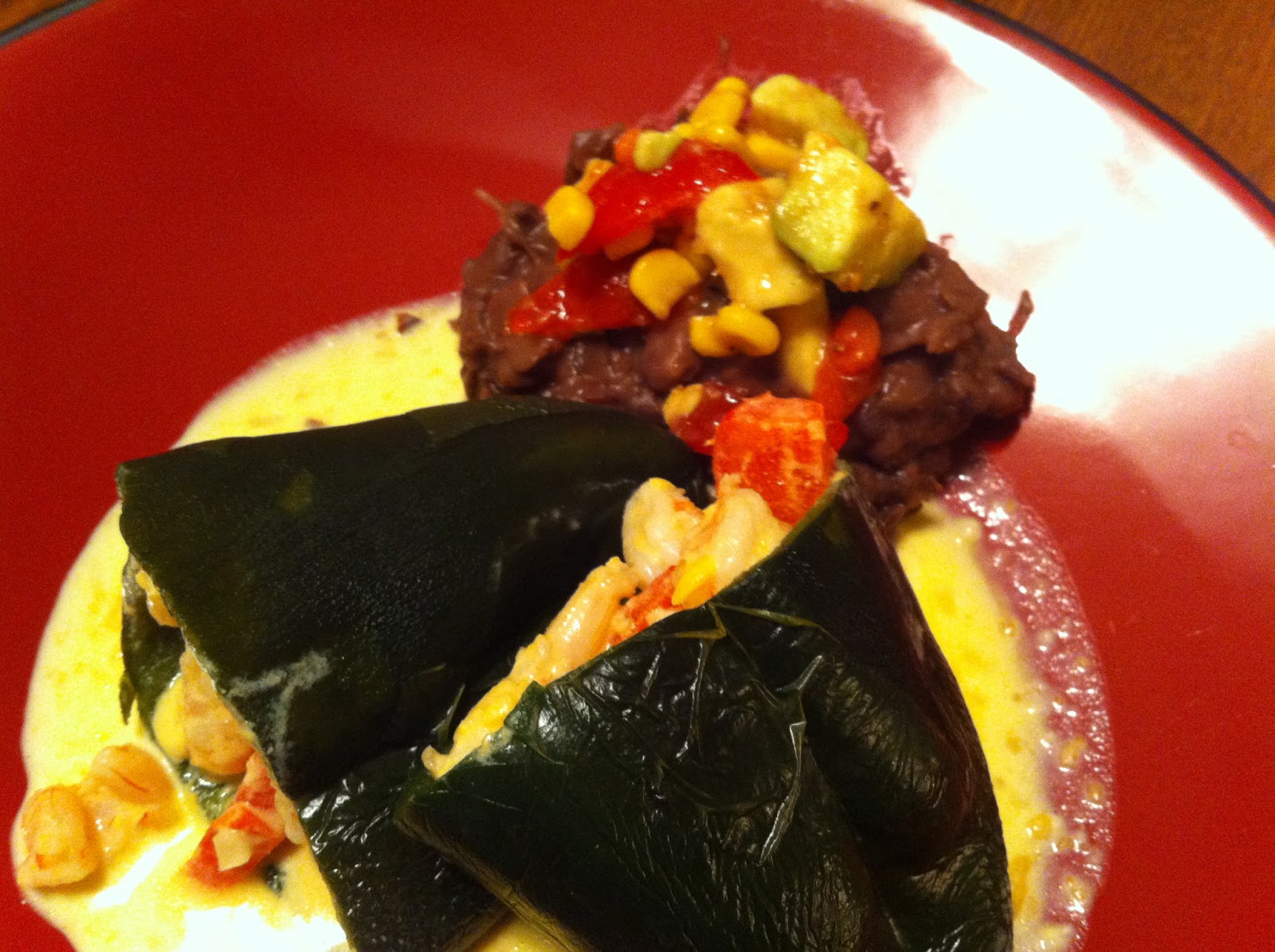 Cut the bells pepper in half lengthwise and remove seeds and membranes. Place cut side down on a baking sheet. Place the poblano peppers on the baking sheet. Broil for 10 minutes or until blackened, turning poblanos halfway through to blacken all sides. Place the peppers in a paper bag and fold to seal. Let stand for about 10 minutes. Peel. Chop the bell pepper. Cut the tops off of the poblanos and remove seeds.

Heat a skillet over medium high heat and add the oil. Add the shrimp and cook for about 3 minutes until cook through. Remove from the pan.

Add the garlic to the pan and cook stirring constantly for 30 seconds. Sprinkle with flour and CRP and cook for 1 minute. Whisk in the half-and-half and 1/2 cup milk; cook 1 minute while stirring constantly. Remove from the heat and let stand for 2 minutes. Whisk in the cheese and stir until melted. Place 1/3 cup cheese mixture in a bowl, add the bell pepper, shrimp, parsley and lime juice, and stir to combine. Stir the 1/4 cup milk into the remaining cheese mixture. Stuff the poblanos with the shrimp mixture. Serve the poblanos with the additional cheese mixture. 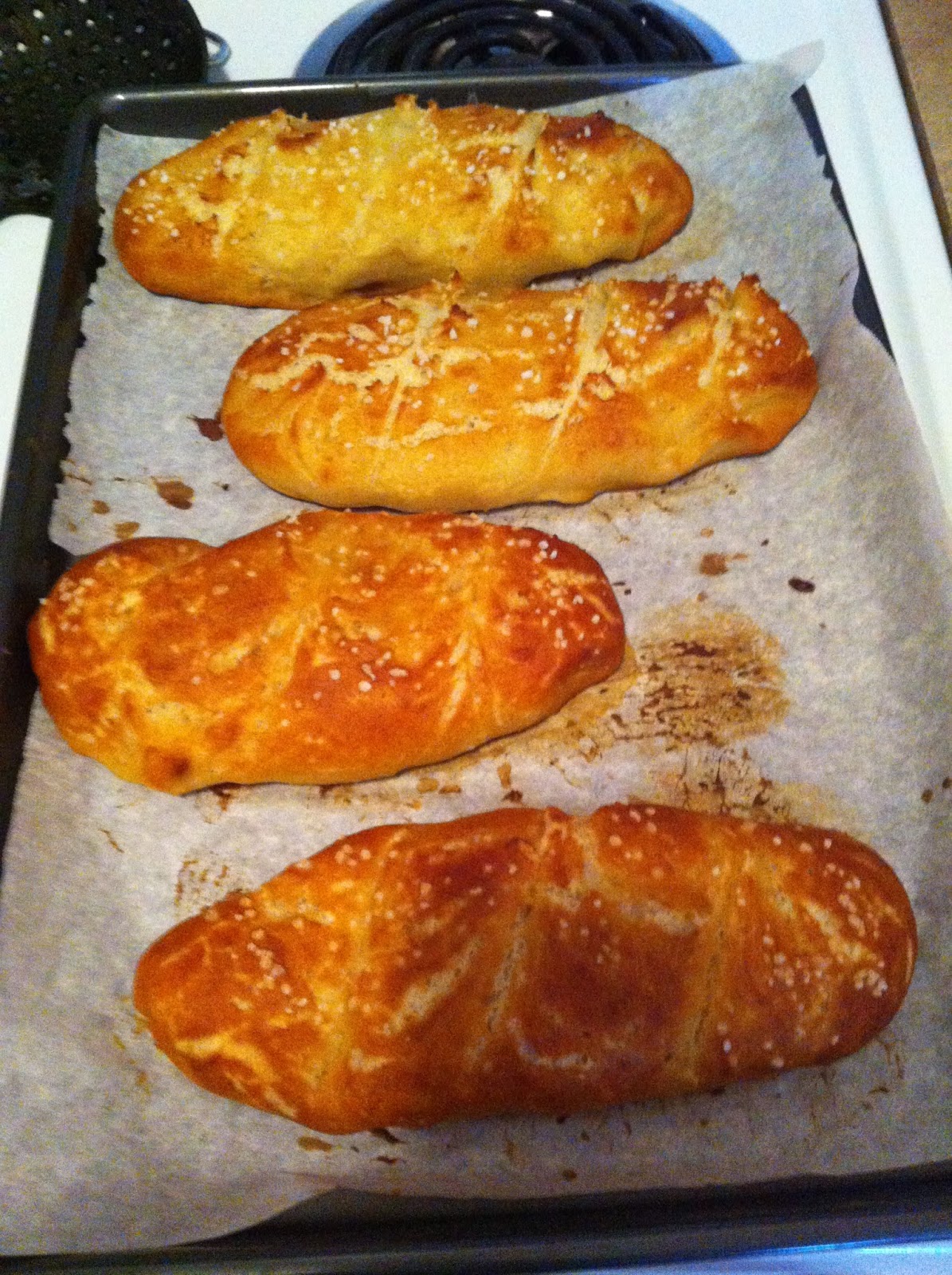 I made hot dog buns!

And to make them even yummier, I made pretzel hot dog buns! Holy moly you gotta get on this as soon as possible. Before summer is done and the barbecue is packed up. On second thought, these may be your excuse for hot dogs any time of the year. Or they'd make one hell of a hoagie today, tomorrow and every day from now on. 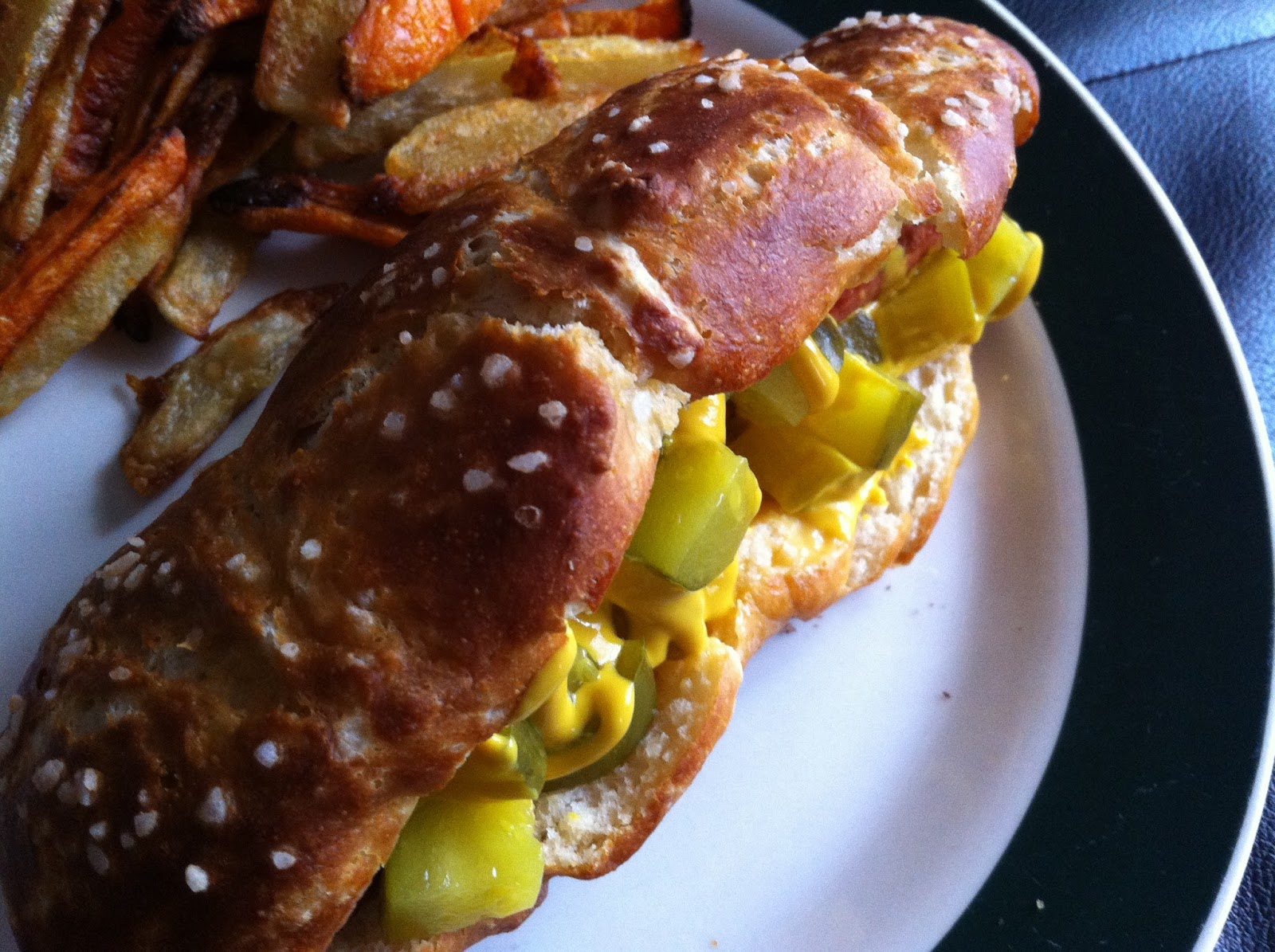 Combine the milk, water, sugar and honey in a microwave safe measuring cup. Microwave for about 45 seconds until it reaches 105 F. Pour into the bowl of stand mixer and sprinkle with yeast. Let sit for 10-15 minutes until bubbly.

Add the oil and flour to the mixer. Mix on medium speed about 5-7 minutes until the dough is smooth and pulls away from the sides of the bowl.

Bring a large pot of water to a boil. Add the baking soda. Add two buns at a time and boil for 30 seconds on each side. Repeat with the other two buns. Place them back on the baking sheet and immediately sprinkle with kosher salt. Cut slits across the top of the breat.

Bake 10-15 minutes until golden brown. Once cooled, slice down side and serve with hot dogs topped with mustard and pickles (or whatever you prefer).

One of the best things about living is the Midwest is that you're surrounded by farmland. Coincidentally that is also one of the worst things-- flat land as far as you can see and hours to get from one place of civilization to the next. But let's focus on the good, okay? Farmland = fresh produce at the farmers' market during spring, summer, and fall! Farming at the university = fresh meat from the meat lab! A couple of weeks ago I had my first visit to this infamous meat lab on campus. One of my friends had been telling me about it since I started here but she finally convinced me to go. It was beautiful. There were wonderful cuts of meat from pigs and cows as well as fresh eggs!

I decided on some roast beef, mushroom and swiss sausages, and thick cut pork chops. The sausages and roast beef were pretty darn delicious, but the pork chops were AMAZING... so tender and fresh. I doctored them up to resemble a cubano sandwich-- stuffed full of swiss cheese, ham, pickles, and mustard and coated with crunchy panko. The original recipe from Cooking Light used a pork tenderloin and although I'm sure that would be good, but the pork chops allowed for quick cooking time and individual sized portions. 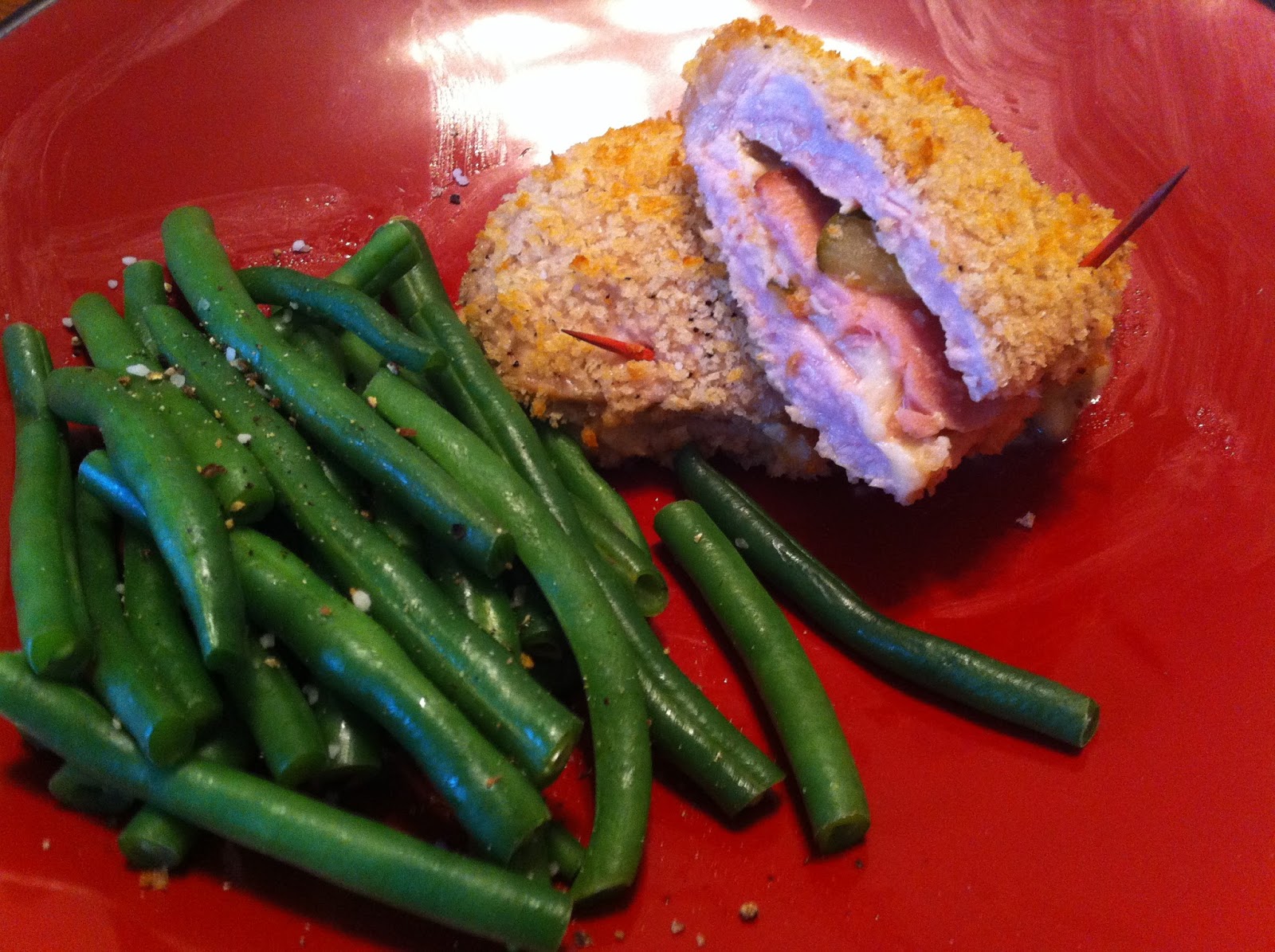 Directions:
Preheat oven to 400 F. Place a wire rack on a baking sheet and coat with cooking spray.

Separate the two sides of the pork chop. Using a sharp knife, slice into the pork chops to butterfly again but do not cut through. You want to have two butterflied chops that are about 1/2 inch in thickness.

Spread 1/2 tbsp dijon mustard over the open side of the chops. Place half of the swiss cheese slice on each chop, top with half of the ham slice and half of the diced pickles. Close the chop by pulling the top side back over the bottom and secure with toothpicks. Season the chops with salt and pepper.

Place the panko in a shallow bowl. Crust the stuffed pork with the panko, pressing to make sure it sticks. Place on the baking sheet. Coat the top of the chops with the cooking spray.